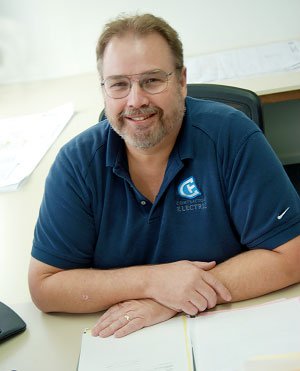 Born in the Northwest to a native Oregonian family, but raised in Santa Barbara, CA.; I spent two years as a missionary  in the northeast area of Argentina in the late 70’s. I still maintain my fluent Castellaño (Argentine brand of Spanish). Upon returning to the United States, I moved to New York City for 10 years before returning to Oregon. I worked there for a large family owned electrical contractor with 1000 electricians, where I was privileged to work on dozens of new skyscrapers, Wall Street projects, and the Statue of Liberty renovation project, to name a few.

I returned to my roots in Eugene in 1989 so that I could be closer to my family. I worked as the Chief Estimator, project manager and design/build team member for Philips Electric for 16 years which was later purchased by Christenson Electric. I also worked for Builders Electric for 6 years, where I helped them modernize their design and estimating programs, project managed and estimated. I also designed many of their larger commercial projects during the time I was there including the LEED Platinum showcase Kendall Toyota project in Eugene.

I  married  my sweetheart, Pam. Together Pam and I have 4 children and 6 grandchildren including the youngest, a 5-year old boy which we are raising as our own. We enjoy spending time with our grandchildren and our children. We enjoy concert performances of all kinds and traveling.  Never a dull moment in our home.
My 40 years of experience in the electrical trades encompass a wide variety of projects and positions including:

Noted NYC projects as well as other more local area projects Steven has bid, designed or managed before forming Contractors Electric include: